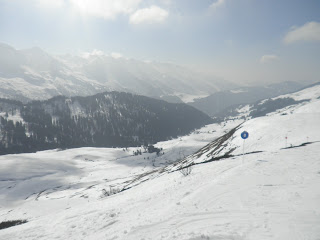 I came relatively late in life to skiing. I was 25 when I first donned those unwieldy boots and took to the snow in nervous trepidation. I loved it at once although it took slightly longer to develop any level of competency. I managed to squeeze in four trips before the birth of my first child and then followed over a decade of sad resignation to the fact that there was no longer any opportunity for me to ski.

So last year, when an invitation to a girls’ trip landed on my facebook page, I jumped at it with very little prompting. I begged and borrowed some kit and when at last I found myself at the top of a mountain again, it almost felt as if I had never been away.

After a few slightly shaky runs down, I regained my ski legs and by the end of the second day I was skiing slopes that would have daunted me back in my heyday. During the three days that we were there, I skied more red runs than I had done in the whole of my previous experience. And I didn’t fall. Not once. Whereas on my previous trips crashing into barriers, tumbling over children and sailing down slopes on my backside had been common occurrences, this time I remained vertical no matter what the mountain threw at me.

Of course we went again this year. A repeat trip to the same place with almost identical personnel. Another fabulous few days with plenty of skiing and no incidents. But this time I started to wonder why my earlier trips were so very different to the later ones.

The answer is very clear to me. Competition. It is something that barely features in my world these days. I am happy in my own skin and rarely feel the need to compare myself with others. Indeed, I actively steer clear of it which is no mean feat in Ilkley. But back then it was different. My first two trips were with people that I worked with. We were a mixed bunch both in terms of sex and ability and I wanted to prove myself. I went fast because I could and because I didn’t want to be left behind. Even later, when I skied with my husband, I felt an uncharacteristic need to show him that I was capable and could hold my own against him on the slopes.

But in the company of women it is very different. Who cares who is the fastest? The pecking order of ability was very obvious, with me falling somewhere in the middle but that was just accepted as fact without anyone feeling the need to prove anything to the others. There was, in some cases, the need to prove something to themselves but in an environment of genuine support rather than thinly disguised one-upmanship, it is much easier to combat any misgivings and win.

The motivating force behind most of the decisions made on the slope was a desire to ensure that each of us skied to the best of our ability. This was achieved either by the stronger skiers helping the weaker ones or by everyone feeling confident enough to express what they really wanted to do without fear of reprisals. And as a result, I skied better and for longer knowing that all I had to do was what I felt comfortable with.

It’s an attitude that I shall try to weave into the rest of my life now that I’m home. Trying to support others rather than using them as a springboard to showcase our own skills is not only far more satisfying but seems to result in everyone achieving their best and that has to be a better outcome doesn’t it?