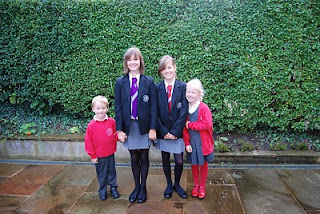 Back to school tomorrow. Uniforms labelled and ironed. PE kits relocated. Shoes polished. Water bottles thrown away for resembling a health hazard. We are ready to go.

It always surprises me how quickly you can forget things, how one routine can be rapidly replaced by another. This will be the tenth September that I have arranged children in front of the hedge in the garden and taken photos of them looking squeaky clean and sometimes frighteningly small prior to setting off down the road to school. Term time is what I do. That’s how my life is. The holidays are just a blip, something that changes the natural balance of my world, albeit briefly.

I run a tight ship in the morning and the result is invariably four clean, dressed and fed children out of the door on time. So how can it be that after a measly six weeks I have forgotten how on earth we achieve it? Sitting here now I can’t imagine how they will all be awake in time to leave, let alone be ready. I have been up with the lark all summer, working on my writing before they get up and make concentration an impossibility. Generally,the little ones have not been far behind me. But the big ones?! I’m not sure either of them have seen 8.00 (the time they have to leave the house) all summer.

Give it a week or so, let all the activities and the endless ferrying and meals at irregular times to accommodate each child’s needs kick in and the long lazy mornings of summer will be something that I will struggle to believe in let alone remember.

And what of the summer itself? Well, it’s been nice to be relaxed. The kids have had a lovely time I think but the holiday never pans out as I plan it. During those few hot days that we always seem to get in May or June, I have ideas about long, sultry days by the river catching minnows, picnics on the moor, afternoons laid out on towels at the lido. It never tuns out that way of course. Sometimes,the weather turns bad the moment the final school bell rings as it has the last few years. In the cold years I don’t fancy sitting by the river in my fleece whilst the wind whips down the valley freezing everything in its path.

Occasionally. we have hot summers but then the world and his orange wife descends on Ilkley. The trains are heaving with holiday makers from nearby towns and cities and the roads block up with cars double parked on every available corner. In summers like that I would struggle to find a large enough patch of beach free to put my towel down on and I’d rather stay in the privacy of my own garden and forgo the delights of the great outdoors, venturing forth only late in the day when the hordes have made their way back from whence they came.

This summer has been like the proverbial curate’s egg. a mixture of good days and bad. Almost none of the little pre summer dreams that I had have come to fruition. It was either the weather or an unexpected guest or a complicated arrangement made by the big ones that kept us at home. But no one was bothered. I did suggest a couple of excursions only to be told that they would prefer to stay here. We seem to have been out of routine for ever and yet I can’t quite believe that it’s over and that term time is about to engulf me again. I’m not sure I’m ready. I have checked the start dates for everything and written down each evening’s commitments on a sheet at the front of my diary but it doesn’t really seem real yet. My real life is a bit of a blur.

I will be confused for weeks. Somehow, my brain forgets that the summer has gone. Autumn can be a lot like spring in temperament and I catch my self planning for the long break again even though I know it’s already spent. I suspect that part of the reason is that I know that once summer has gone the next thing looming on the horizon is…..No. I’m not going to mention it.

So the children return to school, life becomes a whole lot more hectic and I get my days back to cram full as I will without having to factor small people into the equation. The table tennis table will fold away, the outdoor cushions will find their way back into the garage and I will think about planting bulbs. The end of summer for another year. But the start of a new school year with the all the dramas and adventures that that will bring. And the start of my degree! Bring it on.