We’re just back from a week in the woods. Not the wild kind with no civilization to speak of and a bear around every tree stump but the contrived and created type where the next door lodge is but a stone’s throw away. We go at this time every year and have done forever. At the end of each trip, I tentatively suggest that the elder two might have grown out of it and we might give the next year a miss. Each time I get a resounding ‘No’. They love to go and so we go. 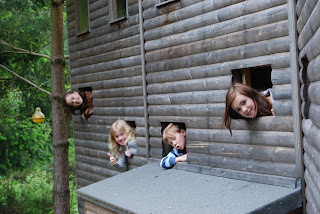 It’s easy to see the appeal of the place for the younger two. They are happy pretty much anywhere and there there are bikes and no cars and an enormous swimming pool and acres of forest to explore. It’s less obvious in relation to my two teenagers. There are no computers, a patchy phone signal, no friends nearby and they have to spend a week in close proximity with their siblings.

But they don’t seem to mind. They are happy watching birds, careering round the site on bikes and playing endless rounds of tree stump tig. Gone are the mobile phones and the skype. They stop wearing make up and fiddling endlessly with their hair and who cares what they’re wearing. There’s no one there to see.

This attitude made me wonder and two things crossed my mind. Firstly, whilst 14 might seem terribly grown up, particularly when I see my eldest and her friends dressed up for a birthday party, she is still a child. She is still happy climbing trees, flying down water slides and playing crazy golf. Yes, she and her sister are on the cusp of another stage in their lives but just at the moment they have more in common with their younger siblings than they might believe. So, give them the opportunity to play and that’s what they will do quite happily.

Secondly, it was easy for them to play because there was no external pressure on them. Who would see that their hair was a mess and that they had no mascara on? No one that mattered because they were unlikely to see any of our fellow guests again. We all know what it’s like to worry about what others think but for all I tell them that it doesn’t matter, the views of others still frame most of their actions at home. But in the woods they have a chance to be themselves again without fear of not fitting in or being left behind and it’s refreshing to see. My children being children whilst they can.

So we shall go to the woods again next year and the year after that until they finally say that they don’t want to go. I hope that day is a long time coming.