Last night as part of the Ilkley Literature Festival, I went to see Chimamanda Ngozi Adichie speak about her writing and her life. 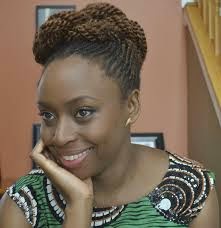 I have to admit to not having read any of her stuff before I booked the ticket but an extract of Half of a Yellow Sun was in my course book as an example of rhetorical devices and so I figured that she must be quite good.

And then, as these things do, a whole series of coincidences tumbled on top of me. Her latest book, Americanah, was shortlisted for the Bailey’s Prize and I discovered that they had made a film of Half of a Yellow Sun which had recently been released. I quickly devoured both books.

My 16 year old found Americanah on the kindle list that we share and read it too (faster than me in fact.) This lead to interesting discussion about whether race or feminism was the stronger theme. All those years you spend wiping bottoms and saying no are suddenly worthwhile when you start to have this type of conversation with your off spring.

Then, I was telling my 17 year old where I was going on Friday night.

‘Wait, wait!’ she said, putting a hand up to silence me whilst she searched for something on her phone.
‘Chimamanda! She’s amazing!’ she said and pressed play. A rich Nigerian voice filled the air between us.
‘This is her!’ she said. ‘She’s on Beyonce’s song.’
And she was. I later learned that it was a sample of a Ted lecture that Chimamanda gave.

And so suddenly, this previously unknown to me Nigerian writer was touching everything that I held dear.

She didn’t disappoint. She was intelligent and thoughtful with a dry sense of humour and a quick wit and she left me not with that deflated feeling that some writers do of never being able to achieve what they have done. Rather, as I walked through the twilight towards home, I felt inspired to keep going. I may never win a prize or speak in public about my work. I might not even get published but I am doing the thing that I love and Chimamanda reminded me of how important it is to hang on to those things with both hands and never let go.