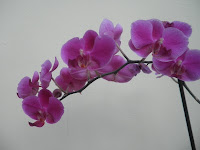 There’s been something amiss in my house this week. It took me a while to work out what was lacking. All children present and correct. Ironing board in situ. Laptop up and running. So what was the problem?

No flowers. I always have flowers in my house and this week there have been none. When I thought about it, I realised that there were a number of reasons for this. Firstly, we had been away. Flowers do not survive holidays and so were all cleared away before we left to save me coming back to piles of sad and shrivelled petals. Secondly, Sainsbury’s had moved its flower display so I walked right past them when I was doing the weekly shop and finally, the sweet peas that I cut from the garden had all faded without there being any more ready to cut.

I love flowers in my house. Nothing grand. Some freesias, a few gerberas, maybe a lily or two. Somehow they connect the inside with the outside so even if it’s overcast and damp outside I can pretend that I have just wandered in from my garden, trug in hand and beautifully arranged some freshly cut blooms artfully in a jug.

That said, apart from the aforementioned sweet peas, I never cut flowers from the garden for the house. This is partly because my garden is not yet mature enough to have large drifts of flowers to cut and partly because flowers look so much more beautiful and last so much longer in their natural habitat. I have thought about growing flowers specifically to cut but have decided against it because I know that I will never be able to bring myself to chop them down.

I adore flowers but it’s not just me is it? As all men know, most women go weak at the knees for a bouquet. We can’t help ourselves. Even though we know that the quantity of flowers is usually in direct proportion to the level of guilt prompting their purchase we can’t help but be delighted. Large bouquet. Heinous crime. And yet, we still gasp in gratitude when the delivery man knocks on the door.

Strangely though, you can have too much of a good thing. One year my husband sent me a massive bouquet on the 14th of every month. It started out as a bit of a game. January – thank you for Christmas. February – Valentine’s Day. March – my half birthday. By the time it got to June I was taking the arrival of my flowers for granted. By September I was beginning to think that it would be better to have a few flowers each week rather than lots all at once which then died leaving me without for a week. Talk about fickle. In the end, I had to tell him that I didn’t want to sound ungrateful but that little bunches now and then would be just as, if not more, appreciated.

I think it was the predictability of the flowers’ arrival that took away their magic. They weren’t any less beautiful because they were expected but most of the delight for me is in the surprise of receiving them. So today I shall go and buy myself cut flowers. I have tried with flowering plants, which ought to have the same effect on me but somehow never do. It has to be cut flowers in a vase but then I’m a happy girl.