We are just back from a few days in Paris. Spurred on by our surprisingly successful trip to London last Easter, we decided to venture further still and try and give the children a taste of the French capital. Foreign city-breaks up the ante somewhat as far as I am concerned. Not only do I have to keep my children safe whilst negotiating the unfamiliar transport system and ensure that they are entertained and interested but I have to do it all in French. It’s a challenge sometimes, especially when everyone is tired and hungry and tempers fray a little. 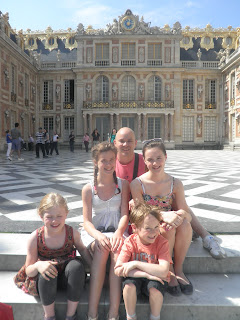 And this leads me to the biggest problem I have whenever we travel but which is magnified when we are in  another country. What, when and where will we eat?

Feeding my family is an issue for me generally. Finding something that all four children will eat is hard enough at home. It’s not that they are particularly fussy. It’s just that they have vastly differing likes and dislikes. So whilst each child will eat a wide variety of dishes there are very few that actually coincide with one of their siblings. When we are out and about, the difficulty is magnified but generally we can find somewhere where the menu has something that will cater for each specific requirement.

However, this is not necessarily the case when we are abroad and particularly when in France. Wandering around city streets, carelessly perusing menus and selecting a cafe or bar that looks inviting is part of the fun when there are two of you. You can allow yourself to be drawn in by the sound of laughter, the twinkling lights and the couples lounging at little round tables and staring out at the street scene beyond.

Not so with four children. Even finding a table in anywhere that looks appealing is nigh on impossible. Instead of sitting outside in the balmy evening air soaking up the atmosphere and feeling cosmopolitan, if there is a table big enough to seat us all it is likely to be inside, at the back, by the loos. Not terribly Parisian.

Assuming we find a table we then have to hope that the menu has something that the children might contemplate. Shellfish? Game? Steak tartare? Snails? Hmmm. I know that I should try and widen their culinary experience and select for them. But they are hungry and the food is expensive. I just want something that they will eat. In plenteous quantities.

We once stayed in an all inclusive hotel. The food was all laid out so the children could pick what they liked the look of and if it wasn’t to their taste they could abandon their plates and start again, leaving we grown ups to sample the local delicacies. It was a perfect arrangement but not one that I can easily replicate.

Needless to say, the most successful meal that we had in Paris was in a stylish Italian restaurant just off the Boulevard St. Germain. Now, the Italians know how to feed a family. Maybe Rome next time?