Last week my friend went on a course. Billed as ‘Vikings and Volcanoes’, it was designed to be a day’s romp through the highlights of Iceland but actually they seemed to spend rather a lot of time talking about elves.

This caught my interest. Whilst it flies in the face of what I consider to be my logical intellect, I have always been strangely drawn to magical creatures. Fairies, mermaids and unicorns have resonated highly with me since childhood. I love the idea of there being a parallel world existing side by side with ours which we fail to see either because we aren’t looking or because the ability to notice is reserved to special people only, like children. So although I’m pretty certain that there aren’t any pixies living in the wilderness at the bottom of my garden, I would be delighted if someone proved me wrong. 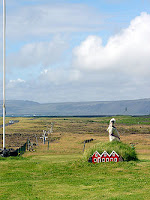 And so back to Iceland. What I gleaned, second-hand from my friend, is that in Iceland a belief in the ‘Hidden People’ is both prevalent and totally acceptable. Elves, seen only by those that the elves choose to give the power, feature heavily in the country’s folklore and traditions. You must never throw stones for fear of hitting them and building projects have been put on hold whilst sites have been checked for signs of elf settlements. Apparently, houses like this one are built in gardens to ensure prosperity.

I’m not sure what it is about these ideas that appeals to me. It’s certainly not believing in something that I can’t see and which defies scientific explanation. I could do that here along with millions of others and be in good company. I think it’s more to do with there being a possibility that we don’t know it all. I like the thought that something could have slipped through the net and be laughing at us here on earth whilst we fix our attention on the cosmos and ignore what’s going on under our noses. I also love the idea of living somewhere where it’s perfectly acceptable to believe in elves after you leave Infant school, to have minds so open to the extraordinary that it makes it seem like anything could be possible. If we close our minds to everything that is not supported by rational reasoning then there’s no room for the imagination and that would be a very dull place to live.

Try as I might, I know that I am unlikely to see a unicorn in a shady glade or a colony of mermaids in a rock pool. But I would really like to believe that fairies or elves, pixies or sprites happily coexist with us and that this could explain some of the more mysterious questions of life even if I never actually see one.