This is nothing new.  Here’s a post I wrote in 2010 about  how much I love Facebook. Since I joined, way back when, I have been happy to spend a considerable amount of time on it because of the rich and varied returns that I got back. Last year alone I liked over 18,000 different things and I am a discerning ‘liker’ – I only click on things I really do like. Imagine how many things I actually saw to ‘like’ that many.

But this week I have been setting my goals for 2017 and one of the items that I was reflecting on from 2016 was my ROI (Return on Investment) so that I could decide whether I was putting my energies into the right things. Two things struck me as a waste of my precious time: housework (but I have to do that) and Facebook.

So why has the thing that I was previously happy to sink weeks of my life into suddenly become a questionable use of my time?

Well, it might just be my Timeline but I find that the level of interaction has altered. There is a lot more liking and a lot less chatting which is fine but doesn’t make for a great conversation. Rather than expressing a personal opinion, there is now so much online content available that it is easy to share an article so that others can read it for themselves. Facebook is trying to position itself against YouTube and so it gives a lot of exposure to shared video content and with the social media competition all very image based, pictures are used to say what words no longer need to.

The trouble is, all this clashes with how I like to use Facebook. I want to dip in and out, share a bit of banter or a thought or two with someone and then get back to what I am doing. It needs to be quick, immediate, capable of being done in a queue. So I’m not going to watch all those videos, read all those articles or click through onto websites. Instead, I end up liking the ones that look interesting and moving on without comment. Sometimes I will save them for later but that’s rare. With the best will in the world, I am never going to have time to get to them all. But unless I say something, there is no conversation generated and it just becomes a glorified magazine.

This is a great time to be alive and it is amazing that not only do we have all this content at the tips of our fingers but that we are moved enough by what we read or watch to want to share it with our friends but this doesn’t leave much room for old-fashioned conversation.

I know. What happens on Facebook is hardly old-fashioned conversation but frankly, it is the closest I’m going to get with many of my Facebook friends who are scattered to the four winds and would have been lost to me without social media to keep us in touch. I like to hear what they think rather than just be referred to something that they read.

And so when I did my 2017 Plan and considered my ROI, Facebook did really badly. I have toyed with the idea of abandoning it, not entirely but so that it becomes something I look at a couple of times a week rather than a couple of times an hour. But I can’t quite do it. I am still harbouring hope that it may come back to something close to what it was in its heyday and I can again enjoy some dinner party standard conversations.

So I have decided to have Facebook as a loss leader in my Plan again this year and hope, against hope, that it will rediscover what made it great in the first place. Fingers crossed.

PS The irony of you having to read this to get to what I think has not eluded me!! 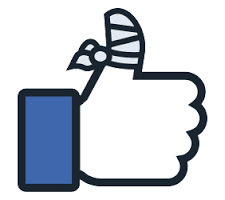