Skip to content
Previous Next
Maxine Peake and Beryl Burton.

You’ve got to love Maxine Peake. 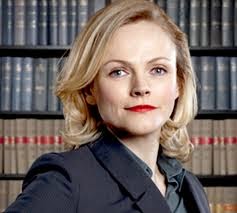 From the irrepressible Twinkle in Dinner Ladies to the straight-talking Martha in Silk, she is fast becoming a national treasure of stage and screen.

So when I heard that she had turned her hand to writing, I was curious. I’m aways a bit sceptical about actors who write. They seem to turn to the keyboard when other work falls fallow, as if writing is second best or else produce something with the full marketing might of a big publishing house behind it so their book gets rocketed to the heavens whether it merits it or not.

Anyway, she was in Ilkley last night as part of the Ilkley Literature Festival to promote her play, Beryl which is on at the West Yorkshire Playhouse to coincide with Yorkshire’s hosting of Le Grand Depart next month. Of course I was in the audience.

I liked her immediately. Unfazed by a theatre full of people gawping at her, she told stories from her acting career with such humour and self-depreciation that you couldn’t help but love her.

Then the discussion turned to her writing. When she said that actors often think they can write, she had me on the edge of my seat, waiting to hear what would happen next. Then she mentioned a radio play that she had written about a pit protest, Queens of the Coal Age, which follows the true tale of Ann Scargill and other miner’s wives who occupied Parkside Colliery.

As it happens, I heard the play when it was broadcast, not realising who had written it. It was funny, thought provoking and emotionally challenging and I remember stopping what I was doing so that I could listen properly.

She talked about how she was drawn to tales of strong women and how, encouraged by those around her, she strove to capture their stories faithfully and bring them to a wider audience. I couldn’t help but think that someone should write the story of Maxine’s life for the stage. It would make fascinating viewing.

So after last night, I love her even more. She is the kind of woman that I strive to be. Proud but without prompting envy, strong but keeping others in her thoughts, determined but realistic. However, I’m sure I will never make a theatre full of people laugh like she did, no matter how hard I try!