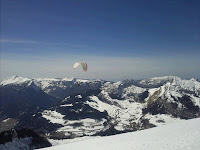 I have a fascination for flying. If Icarus’s dad was still in business, I would probably have commissioned myself a fabulous pair of wings by now. That’s what my paragliding is all about and I may yet have a go at hang gliding. I love to be flying above the world under my own steam and looking down.

An obvious extension of this is my interest in birds, who naturally have the wherewithal to do what I can only dream of. I like my birds to be huge, majestic, powerful and ever so slightly scary so it’s birds of prey that I’m drawn to. Whenever I see the Red Kites soaring through the skies near my house I become transfixed. They rise effortlessly on the thermals and then stoop on their unsuspecting quarry with such elegance that I cannot help but be in awe of them.

Yesterday I was lucky enough to be treated to a day’s falconry by my husband. We got to watch the birds work and even flew a couple ourselves but the thing that made a lasting impression on me was not so much the magnificence of the birds but the passion of Mark, the main man at the centre.

There were nine of us on the course and apart from being able to recognise the odd species, none of us had any prior knowledge. So Mark began to tell us things. He explained about how the wings work, the intricacies of the eyes, that owls are actually quite stupid in comparison to other birds, how hawks think. He told us about the science of breeding birds for the market, how measurements are taken from parent birds to ensure optimum mating potential. He explained how the birds have to be weighed to make sure that they are at the perfect size for hunting and to make sure they are hungry. We learned about how their respiratory system differs to ours, how their beaks and talons work to catch their differing prey.

He talked and talked for three hours and I was left with the clear impression that we had barely scratched the surface of his encyclopedic knowledge. I was completely mesmerized.

And this is when I realise that what I have is a passing interest in the subject. In comparison to the deep passion that Mark clearly has, my enthusiasm is like a toddler’s who finds a new toy only to discard it again five minutes later.

There is no subject on which I could talk knowledgeably for three hours without stopping. I might have been able to babble on about employment law once but these days I know a little bit about a few things but not much about anything – just a bundle of random strands of information.

And, if truth be told, I have no desire to learn everything there is to know about something any more. There are too many things that I want to try. I love paragliding but if I want to reach several thousand feet then I either have to devote the time to getting my qualifications or take a tandem flight as I did in the picture above. Similar result – much less effort. If I want to fly falcons I could buy a chick and learn how to train it or I can go on a taster day. 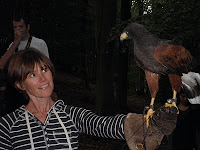 There was a time when I would have thought that such a shallow dip in to the water was hardly worth the effort but now it appeals. It means that I get a flavour of something new without it impacting disproportionately on my life. And I discovered that a Harris hawk can live for 25 years. I’d be nearly 70! Think how many other things I can have a go at before then.