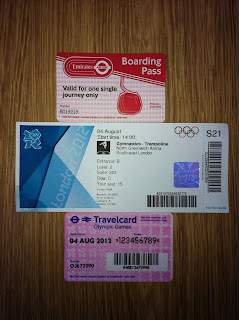 I’ve been to the Olympics! Can you believe that? Well, if you know me you may find it slightly surprising. Sport really isn’t something that occupies my mind in any meaningful manner. At school I wasn’t bad at PE. I never had to suffer the humiliation of being the last to be picked for a team although I was certainly never the first. Sport just never captured my attention but then none of my family was interested either and so it’s hardly surprising.

When we learned that the Olympics would be coming to London however I was instantly determined that I would go to see the gymnastics and that I would take whichever of the children wanted to come too. Of course that all changed when the tickets were released and I discovered just how difficult it was to actually get tickets for the sport that you were interested in – and just how expensive. With regret I abandoned the plan.

Fast forward several months, more ticket releases and a considerably lighter purse later and my Third-born and I were London bound in a wave of excitement. I don’t think I, or many others, had appreciated just how gripped by the Olympics the nation would become. Wall to wall tv coverage combined with the school holidays and an unprecedented level of success in the medals table have meant that the country has a buzz about it that I’m not sure I’ve seen before. Well, if the likes of me, who would never watch televised sport unless there was a gun to my head, is enthralled then the rest of the country who is actually interested is bound to buy in to it.

We had a great time. The trampolining was fascinating to watch and very exciting even though the British competitor just failed to make the cut into the Final. We went on the cable car, we watched the big screens in Hyde Park and were amazed at just how well our capital city had managed to scrub itself up for its big day. I have never seen London as clean or as friendly. Nothing was too much trouble and everyone was wearing a smile. It was almost uncanny.

I have to say that I did have the feeling, having been unable to get tickets to go into the Olympic Park itself, that it was all happening somewhere that I wasn’t and my Olympic experience was not quite complete but such is life.

The feeling that I am left with now that I am home with my BBC coverage is one of relief. For so long my home nation has been down at heel. We have moaned about the weather, the bankers, the economic disaster, the government ( whatever its hue), the NHS, fat people, drunk people, lazy people. I could go on and on. I’m not saying that hosting a successful Olympic Games is going to change any of that and, whilst I will be delighted to be proved wrong, I fear Legacy will be a one year wonder. However, we have proved by the way in which the country has transformed itself that we still have the ability to think positively and focus on things that I see as important – hard work and payback, dedication, working as a team, pride in achievement.  I was worried that we had spent so long blaming someone else for all that is not great about Great Britain that we had lost the gumption to do anything about it.

The buzz from the Olympics will die down after a while, the nights will draw in and Christmas will be upon us before we know it but I will be able to lie slightly easier in my bed knowing that deep down we are still a nation that can do more than sit and lick its wounds.