Skip to content
Previous Next
PLUS POINTS AND DOWNERS

There are lots of positives about writing a blog. It started as a way of expressing myself but now, 290 posts later, it’s beginning to look like a pretty accurate record of my life and that of my children. A diary of sorts then. And that’s good.

Also, it makes me think about my world as I search for the next subject matter. It makes me question my decisions and helps me laugh at myself when I’m over sensitive or too po-faced.

And it’s a great discipline. I have a deal with myself that I will post something not less than twice a week and I try hard to comply. I have to take time out of thinking about what to make for tea to consider what I might write, organise my thoughts and then put pen to paper, so to speak.

But there are some negatives and those have been haunting me recently. There’s the guilt of course – guilt permeates every aspect of my life and snakes its way around my consciousness most days. In this case, it’s the guilt of being in breach of my own deal, not having kept to my side of the bargain and penned what I hope to be erudite and interesting posts. Of course, if I tried to eliminate everything that made me feel guilty from my life there would be next to nothing left – and then I’d feel guilty about that. So I suppose that doesn’t count as a ‘Blog Specific’ disadvantage and more just a bi-product of being me!

The main downer is that trying to think of things to write about makes me realise how very narrow my life is. You can imagine that in 290 posts, I have covered most of the stuff that happens to me quite comprehensively and some of it more than once. Every so often, I will try something new or there is a thought provoking parenting development which sends me scuttling to my screen. But most of the time, my life is routine, conducted within the four walls of my house and just a bit dull. 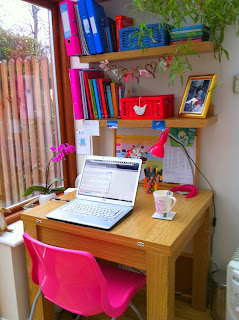 I wouldn’t notice this distinct lack of excitement if I weren’t trying to write about it twice a week. However, in that context it’s really quite depressing! Where are the exciting tales of intrepid travels, the witty anecdotes of interesting family life? Even the odd mild disaster might make an diverting addition. But no. It’s STILL winter and I’m here in my square metre (see picture of my square metre in a thinly veiled attempt to pique your interest) waiting for life to do something extraordinary.

I see some potential blog topics peeping their noses over the horizon so all is not completely lost. But if I resort to listing all my CDs or books that I’ve read in the last five years then you’ll know that I ( and consequently you)  have finally fallen into a dungeon of terminal boredom and that there is no longer any hope for me! At that point you can stop visiting Imogen Clark at Home and I’ll archive the whole, bally lot!