Skip to content
Previous Next
SNEAKING ABOUT IN THE 80s.

‘Fancy having a sneaky experience?’ asked my husband a few weeks back. He has a fondness for odd nights out. The last one was a Twin Peaks night in an old, Egyptian inspired flax mill in Leeds.
‘Ok,’ I replied doubtfully.

But I was wrong to be nervous. The Sneaky Experience turned out to be great fun. Basically, we bought tickets to see a film. We didn’t know what it was going to be but the evening’s organisers gave us clues in the period running up to the night. By the time we got there, we knew it was going to be an 80’s classic. We had guessed Footloose but when we arrived just in time to see men in overalls direct a model plane into the warehouse, we worked out it was going to be Top Gun.

The 80’s theme was well developed and fancy dress was the order of the day. Now, I turned 13 in 1979 so my popular culture and fashion antennae are highly tuned to the 80s. I can remember what it looked like, how it felt. From Lady Di sloanes to jeans with coloured piping down the side. From huge shoulder pads to rockabilly, Phil Oakley’s fringe to Shakin’ Stevens’ denim. I remember it all.

There wasn’t much of what I know as 80’s clobber on display though. There were a few film characters, a couple of quirky Molly Ringwald lookalikes and Vyvyan from The Young Ones. And me of course. Almost everyone else was wearing either neon lycra or netting. Of course they were. Think 80s, think neon lycra and netting. Or legwarmers with high heels. That was another popular one. But did you actually ever wear either of these? Rara skirts maybe but they weren’t made of net. Madonna wore a bit of lace early on and Cyndy Lauper might have had some net but wasn’t that about it?

I didn’t wear net or neon and neither did any of the people that I knew. Huge jumpers. Yes. Leggings. Yes. Docs. Well, not personally but yes. Frankie Says t shirts – ashamed to say yes. 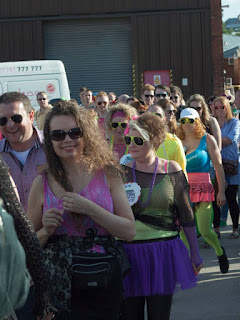 Of course, the reason why the fashion of the 80’s has been mutated into this bizarre, not quite accurate melting pot is because these are the items that are cheap to make and easy for fancy dress shops to cross brand. Buy in a load of tutus and then you can ship them out for hen nights, teenage parties, tarts and vicars and ’80s nights and let period accuracy be damned.

But you can’t really blame the party goers. ( Here is a sample!) Most of them weren’t even born in the 80s, let alone able to make accurate fashion notes for future reference. Pretty soon even those of us who were actually there will be convincing that everyone wore striped tights and tutus. And this made me wonder whether the 50s or the 60s were actually as I imagine or whether Grease and Mad Men  have given us a skewed picture. I should ask my mum.

Anyway, fancy dress issues aside, we had a fantastic night with our Sneaky Experience. There was a mini roller disco,  we sang and wolf whistled our way through Top Gun and then enjoyed a top 80’s disco to finish off the evening. Keep your eyes open for the next Sneaky Experience. It’s well worth all the mystery. 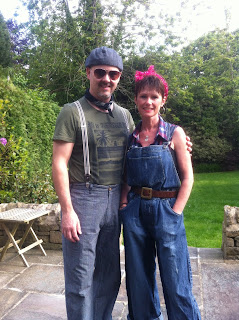 (Here I am in my homage to Dexy’s /Banarama!)