Skip to content
Previous Next
THE ADVENTURES OF HERMAN

“I’ve got you a cake,” said a friend of mine a few weeks ago. She must have seen my face light up because she quickly continued.
“Well,” she confessed. “When I say a cake that’s not entirely true….It requires a little effort to get it be a cake as such.”
She smiled her widest smile and handed me an ice cream tub and an over copied, typed A4 sheet.
“Meet Herman.”

It turns out that Herman is a German sourdough friendship cake. His ethnicity is questionable. I doubt he has ever seen German shores but he is sour dough. When I finally read the instructions, I discovered that Herman had to be kept in a bowl in a warm place and stirred and fed with flour, milk and sugar. After 10 days he is to be divided into quarters allowing you to pass him on to three friends – hence the friendship bit. Then you bulk out the mixture with various tasty ingredients and bake him. There was one point on which the instructions were very clear. He must NOT be allowed to die. No pressure then!

So for three days Herman sat on my worktop and bubbled. My kitchen was filled with the wholesome aroma of yeast and I felt like an earth mother. Herman was fitting well into family life. Then we went away for a few days. What to do? My brother was coming to feed our cats so I left him a quickly scribbled note explaining Herman’s welfare requirements and left. Sneaky. On our return, both the cats and Herman were thriving and I stirred him and fed him until we finally reached the day of division and baking.

I thought hard about who to pass the mantel of responsibility on to. Who would ensure that Son of Herman could continue to bubble and make yeast smells once Herman had gone to that great oven in the sky? I thought of two people that I deemed suitable reliable, decanted Herman’s offspring into their own ice cream tubs, copied the instructions and smugly handed them over with a warm glow that I had played my part in this cake chain letter. I then baked myself two Herman cakes and posted my success on Facebook.

It seems that I was not alone in having had a house guest. Lots of other people commented that they too had been involved. In fact, it appeared that Ilkley was awash with sour dough cake. I even heard tell of one portion that had been left on a doorstep anonymously under cover of darkness. 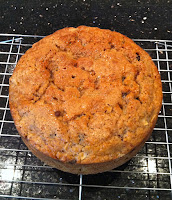 Some time later I got a text. Did I want Herman back? There was no obligation but I needed to say quickly because Herman was headed for the bin. Well, call me a sentimental old fool but I couldn’t let old Herman cark it so back he came to bubble and smell some more and this morning I have baked two more cakes and Herman, or at least my branch of the family tree is no more.

I try not to think too hard about the hygienic elements of an enterprise such as this. Lord knows where Herman came from, how many work tops he had sat on before mine, how many fingers, cat’s tongues or paws he had come into contact with. Baking will surely have destroyed all impurities. If not then most of Ilkley would be ill or dead. And once baked Herman really is remarkably tasty, trussed up as he is with cinnamon and apple and raisins and vanilla and all manner of other delicious ingredients. But in the future I don’t think we’ll be at home to Herman. There’s only so much sour dough cake that a girl can eat.