One of the many reasons why I love ‘Pride and Prejudice’ is that it is so relevant to me. I, like Elizabeth Bennett, am constantly leaping to conclusions based on ill founded ideas and then having to change my mind. A case in point is our family’s recent holiday to Disney World in Florida.

I’m happy to admit that taking the children to Disney was something that I felt we ought to do rather than a burning ambition. However, having decided that the ages of the children made this an optimum year, we booked. I was pretty certain that it would not be for me despite having no concrete evidence on which to base my decision. I imagined small, overcrowded spaces filled with screaming children. I visualized men dressed in unconvincing animal costumes and expected banal platitudes at every turn.

Boy was I wrong? The Disney parks are huge, clean, immaculately manicured. The paths between areas are wide with perfect flowerbeds and water features. There was no litter and no signs of wear and tear on anything despite the huge numbers of people passing through each day. And it all ran like clockwork. Getting all those people through the queues and on to the rides is no mean feat but it was achieved with order and decorum. At no point did my children moan whilst waiting because there was always something to look at or do to keep them entertained.

Even leaving the park was trouble free. We watched the fireworks at Epcot on our last night. There were thousands of people there who all left at the same time as us and yet we were in our car and on the road within 15 minutes of the show ending. Incredible.

So, once I’d relegated my prejudices to the back of my mind, I got on with the task of enjoying myself. We were there for 14 days and were at a park for 12 of them. I had imagined that we would be able to bear no more than a week of it with quieter days in between. In fact, as it turned out we spent our quieter days at Disney’s water parks and had no time off at all. There was too much to do to sit still for long. However, having commanded a mission to Mars, taken part in a disaster movie, watched countless 3 and 4D shows, spent some time on safari in Africa and driven a car on a test track (amongst countless other things), I found that I lost my grip on what was real. It was all rather intriguing.

Yes the Disney message is all a bit mushy and over sentimentalized. Memories are made here. Dreams can come true. But somehow I found myself buying into that because, fundamentally, that is what I believe too. Work hard, aim high and seize the day is not a bad mantra for life.

I don’t need to go back. We had a fabulous holiday but the world is a big place and I feel I have taken from Disney what it has to offer me. However, I would now have no hesitation in recommending the American Disney experience to anyone, no matter how sceptical they are. Of course, Orlando is big and brash. The roads, the cars and the portions are all huge but the customer service is exceptional and the attention to detail is second to none. The Disney experience is something that I don’t think we could do here. We don’t have the space and our attitude is all wrong. But there with the American ‘can do’ philosophy it works like a dream. And dreams can come true! 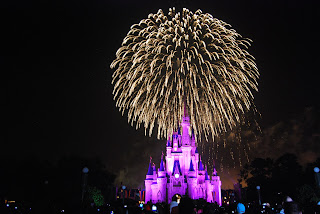