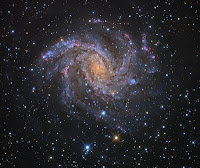 Astronomy is trendy. There’s no getting away from it. It’s everywhere. Each astronomical event is reported on the national news and there have been a string of programmes on TV over the last year with more to come in this. I even have an app on my phone telling me which constellation is which and providing me with the astronomical picture of the day.

I have been wondering why this might be. Having completed an astronomy course myself last year, I am certainly more aware of the press coverage but that doesn’t explain the large budget that the BBC seem to have allocated to it as a subject. It’s certainly nothing new. For as long as man has been looking up, he has been charting the progress of the stars and planets around us. Gazing at the stars and asking why and how and what is as old as we are.

It might be that in these austere times some comfort is to be gained from grasping hold of how small and insignificant we are as human beings, notwithstanding the huge day to day problems that many face. And of course, it doesn’t cost anything to stand outside and stare at the sky which has to be an added attraction at the moment.

But I believe that the major factor in the re-emergence of astronomy is its current face on TV, Professor Brian Cox. He is certainly easier on the eye that Sir Patrick Moore ever was but it’s not just that that’s brought him to the forefront of the public’s attention. Nor is the fact that he used to be part of a successful pop band, although that does add to his mystique somewhat.

No, the main reason that Prof Cox has fired up the imagination of the nation is that he is passionate about his subject, which is in fact particle physics. Every time he opens his mouth we want to listen because he makes what has always seemed so inaccessible, interesting and, more surprisingly, comprehensible.

I’m not suggesting that what he imparts on the TV is more than scratching the surface of his knowledge but it seems very important to him that nothing is dumbed down. He just finds a way of explaining things simply and step by step so that it can be grasped by people with only a modicum of knowledge, like me. And if interviewers do try and simplify what he’s saying and in doing so get it wrong, he’s not afraid to correct them.

And that is my point. Whether a subject picks you up and whisks you along with it depends on who is teaching you. Every so often someone who is passionate about what they know and interested enough to want to share that knowledge with others wanders into your life. If you’re really lucky it happens to you at school. Of my five schools and countless teachers, only one managed to pass on to me a passion that has lasted throughout the subsequent decades. Not a great ratio I think you’ll agree.

This is why I get so cross about those who enter the teaching profession as a second career, not driven by a vocation to inspire young minds but because it fits well with their own childcare arrangements. If all our teachers were like Professor Cox or my music master at school then just think what our children could achieve.

So I say hats off to Brian. He has inspired me, with my B grade ‘O’ level physics, to think that science is not just for brainy geeks and that I might be able to follow if I listen hard. He makes me want to know more. He makes me want to ask questions and discover things for myself and that is rare indeed. I wonder if someone could do the same for my maths!