If you have a good memory, you may remember me blogging last summer about how I was finished with pets. I was so self righteous and determined  in my view that pets are more trouble than they’re worth. I firmly believed that when our one remaining guinea pig shuffled off this mortal coil, I was going to draw the line and we would become a totally human household.

But then I had to conduct a spectacular and very public U turn when I was unable to resist the lure of two beautiful kittens. I know. It’s pathetic but there is it. The kittens arrived last October. Two little bundles of fluff and mischief to delight and worry us in equal measure. 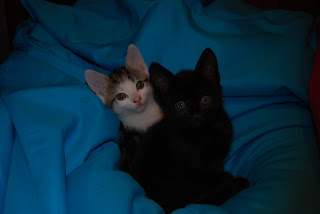 And now they are six months old. They are quite a lot bigger and a little bit wiser than they were when they first arrived and have made such a difference to our household that I can’t really believe that I ever said no more pets.

But something that I didn’t bargain for when I welcomed them in was the impact on my stress levels. It’s not that the kittens misbehave. In the main, they are pretty good, staying on the floor, eating their food not ours and not disgracing themselves on my soft furnishings. They even keep the mice that they catch outside.

No, the thing that is causing the heart ache is their tendency to roam. They seem completely incapable of just playing in the garden. I suppose that they have farm cat genes so it shouldn’t have come as any great surprise that they might wander. And boy, do they wander?

The first time that the black one wasn’t there when we got up, we had an incredibly difficult morning as I imagined the worse and tried to pretend that I hadn’t to the children. He turned up at lunchtime and immediately I hotfooted it to Timpsons and got discs cut for their collars with our phone number on. I imagined that we would only get a call if the kittens were squished at the side of the road. How wrong I was!

The phone must ring most days with some cat loving neighbour asking me if we have lost a kitten. I had no idea that so many people would be concerned for their welfare. Dozens of well meaning folk have rung to say that they are worried about them. Either they are up a tree or playing near cars or just investigating other people’s kitchens. If the land line rings, you can pretty much guarantee that the call will be kitten related.

I am training myself not to fret. I have enough to fret about already without including errant kittens. I know that they are cats and they will wander at will and with microchip and collar disc we are likely to hear if anything horrible happens. But I’m not sure that the stress of not knowing where they are is what I signed up for when I took them in. Perhaps I should view it as good practise for when the children get older? I wonder if I can get phone number discs for them?