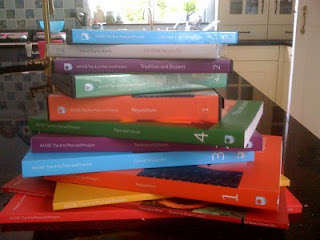 I love the way that things change. It keeps me on my toes. I think I know how things lie and then suddenly, I don’t. It’s always happening to me. I work out what I think is appropriate for my children to do and then they grow up and I have to have a rethink. I make a judgement about someone and then they do something that I didn’t anticipate and I have to have another look. It’s just life but it stops the mundane taking over.

But the changes that I like the best are the ones that sneak up on me and take me by complete surprise. For example, I had decided that I would never have a job working as a solicitor again but before I know it I’m waving my practising certificate and strutting off to meetings. I spent years saying that I am not built to run, had a go and have found that it’s not nearly as bad as I thought it would be.

The most recent development is a biggie and, if all goes to plan, will make a significant difference to my life for the foreseeable future. This time last year I was about to embark on a creative writing course at the Open University. Until then, I couldn’t imagine studying anything again. I suspect that this was as a reaction to all those relentless years in education in my youth and later it was because my post birth brain was mush leaving me unable to focus on anything more complicated than Coronation Street.

But I completed my little course and loved it so I started scouting around for something else to do. Some time in the spring I hit upon a wide based arts course which looked interesting. It was a larger course than the previous one and would take up more of my time but my appetite to learn was well and truly whetted and on the basis that the more you have to do the faster you run, I threw caution to the wind and signed up. And that was it for a bit. I was happy with my choice and I thought it would keep me busy through the long winter months.

And then came the change. The course that I picked is a compulsory course on a number of the arts and humanities degree courses. And suddenly, from nowhere, my course designed simply to keep me out of mischief, became the first step to a BA (Hons). If you had said to me this time last year that I would be embarking on a second degree I would sniggered. Despite the fact that I have always harboured a desire to study English literature and history, it never crossed my mind that I might actually do it. But then two years ago I could never conceive of my having a job, writing a novel, joining a choir, paragliding and a whole host of other stuff that just seems to have happened to me.

So, although I haven’t started yet, I am planning to be a student for the next six years. It seemed an awfully long time until I calculated that by the time I graduate my youngest will still only be 12 and I can’t imagine much changing in my life between now and then. But then I’ve said that before. Long live change!