Skip to content
Previous Next
THE FATHER CHRISTMAS CONSPIRACY 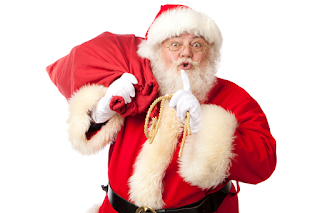 This year chez Clark, the story of Father Christmas seems to have slipped. Instead of being the gospel truth, it has become a magical secret acknowledged between us in sly nods and winks. And thank goodness for that! Who knew that telling porkies to our children could be so stressful? The whole Santa story is peppered with bear traps just waiting for the unsuspecting to fall into. And once you’ve told the story one way, there’s absolutely no going back!

So, with the benefit of hindsight, here are my top tips for getting through the melee.

1. Don’t make the story too complicated. Children have memories like elephants and if the web you weave around Old Saint Nick is too tangled it will trip you up over and over again.

2. Lovely though it is to send letters to Father Christmas up the chimney on Christmas Eve, it’s not terribly practical when the shops are shut and what you have wrapped and hidden upstairs is all there is.

3. The older they get, the smarter they are.
‘I’m not telling what’s in my letter that way I’ll know if Santa is real.’
Marvellous.

4. Allocate just one present to Father Christmas so that you can take the credit for all the others. I will never forget the year that my children sat amongst a pile of expensive gifts and then asked what Daddy and I had bought them.

5. Be careful with wrapping paper.
‘It’s funny that Santa bought the same paper as you Mummy!’
Yes darling. Hilarious.

6. Stockings at the end of the bed are lovely when they’re tiny. You can tiptoe in, deposit the little gifts and await the muffled squeals of delight in the morning. Stockings are far less appealing when your children are still awake at midnight and you’re longing to collapse into bed. At least now I can fill half of ours whilst their recipients are down the pub,

7. Don’t buy gifts too early. I shall always remember fondly the year that my son discovered Lord of the Rings Lego the day the Star Wars set arrived.

I’m not cut out for lying, I’d make a terrible spy and to be honest, I’m quite glad that all those years of slip-ups and warning looks fired over the tops of small heads have passed. Mince pies and a glass of milk (I’m not that keen on sherry) will still be left out. Rudolf will consume his carrot and the magic of Christmas can sprinkle and twinkle all over my day without me having to tell a single untruth. And thank goodness for that!

If you’re still in the thick of it then enjoy the magic whilst it lasts but I for one am looking forward to far more relaxed and honest Christmases in the future.